5th STIFF and 4 days of dreaming

STIFF (Oct 18th – Oct 21st 2018) is an international festival dedicated to student and debutant films. Its purpose is to connect the audiences with the best works of the student and debutant film from all over the world. Its goal is to strengthen the local film production by creating networking opportunities and showing the work of film art which inspires new ideas. 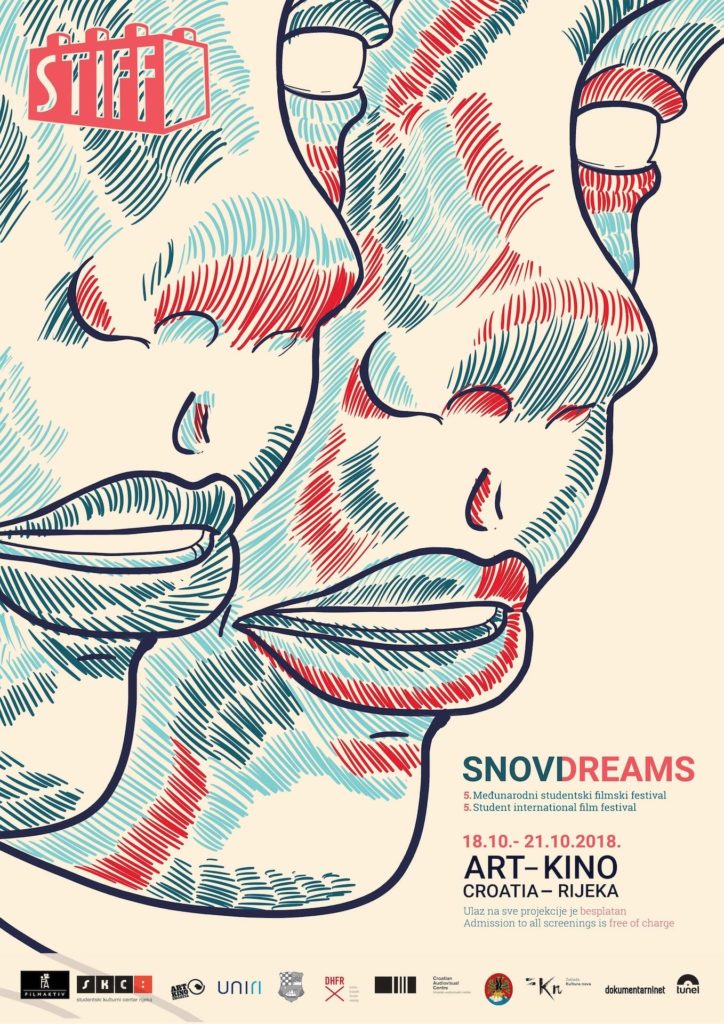 The focus of the 5th annual STIFF is on DREAMS. Dreams of a better society, dreams about dreams and dreams exploring their own boundaries. The playfulness of this years’ programme (by Maša Drndić and Sanja Marjanović) will seem as embarking on a dreamworld roller coaster – from the moment we fall asleep until the waking hour, it will release fairy tales as well as nightmares.

The Festival jury is divided into three teams, each including one professional in the field, one guest director whose film was part of the festival programme last year and one student. They will award Best Fiction, Documentary and Animation films and the audiences will vote for an Audience Award.

In the past two years the festival has expanded its activities and created a variety of talks, discussions, educational and networking programmes under an ‘umbrella’ name STIFF FILM CIRCLE. Some of the participants of this initiative have taken on important roles in growing the festival from one year to another. This year for the first time, the audiences will see a programme – a real REM adventure titled “REWIND” and created by two young selectors previously engaged in STIFF FILM CIRCLE activities, Marta Ban and Sendi Bakotić.

The goal of the STIFF FILM CIRCLE  is to open the public space towards a dialogue that extends outside the institutions i.e. the “safe zone” of the University – and to create a fresh, neutral space for learning through practice, communication and cooperation. The four main discursive programmes within the STIFF Film Circle are: On-the-field education, After screening discussion panels, the Film Critic Workshop and STIFF On the Road.

Within the educational programmes entitled “On-the-field education”, STIFF’s administrative team is leading the students through specific activities which come as part of the festival itself: job roles such as PR, social media management, creation of subtitles, translation, design, hospitality and working with special guests, as well as public presentation – are all offered to students for volunteer participation. This is a way for students to connect, learn new skills, socialise and have fun while creating the festival and until it becomes their own.

After screening discussion panels intent to tackle certain political and social issues and make us think about our identity, sexuality and minority issues.

The late night discussions entitled “Dreamcatchers” follow after programmes: “TALES OF POSTMODERNITY”, “ROUND CORNERS” and “MIND THE GAP!” The creators of the programme and the moderators of the round tables are Greta Grakalić-Rački, Petra Bezjak and Natalija Stefanović.

Aside from the programme happenings during the festival dates, STIFF is also busy during the year, travelling and collaborating with other festivals, universities and organizations as a part of a programme STIFF ON THE  ROAD. This travelling programme of selected films previously screened on the festival, has a goal to strengthen festival’s many connections, promote it and inspire a dialogue on contemporary events – while at the same time raising awareness about student film as such. In the past four years, STIFF has visited Pula and Zagreb, Varaždin, Novigrad, Beograd, Bonn and Edinburgh.

The Student International Film Festival – STIFF – is organised by Filmaktiv and Student Cultural Centre (SKC) in cooperation with Art-kino Rijeka. It is supported by the Croatian Audiovisual Centre, Society of Croatian Directors, City of Rijeka, Primorje-Gorski Kotar County, University of Rijeka and the “Kultura nova” Foundation.

The festival will take place in its usual venue, Art-kino Croatia in Rijeka and the entrance to all the programmes is free!

The entrance to all Stiff programmes is free!

Find out more or adjust your settings.

This website uses cookies so that we can provide you with the best user experience possible. Cookie information is stored in your browser and performs functions such as recognising you when you return to our website and helping our team to understand which sections of the website you find most interesting and useful.

Strictly Necessary Cookie should be enabled at all times so that we can save your preferences for cookie settings.

If you disable this cookie, we will not be able to save your preferences. This means that every time you visit this website you will need to enable or disable cookies again.